A Nishadi stone of 12th century has been discovered in the premises of Karmadevara Gudi at Kunchuru village in Hirekerur taluk of Haveri district in Karnataka. It has been found in the midst of shrubs in an open field at this village. 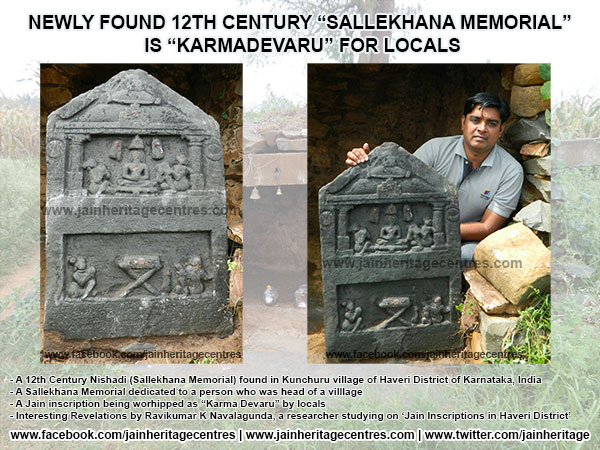 What is a Nishadi?
A Nishadi is a memorial stone related to Jainism wherein they are installed in memory of a person who has attained samadhi (death) by means of following Sallekhana. Sallekhana is embracing the death voluntarily when both householders and ascetics foresee that the end of the life is very near either due to the old age, incurable disease, severe famine, attack from the enemy or wild animal, etc. This is practiced by means of fast wherein the individual gradually minimizes the intake of food and involve themselves fully in God’s worship.

Sri Ravikumar K Navalagunda a research scholar while on his field visit happen to pass by this place and came across this Nishadi.

Structure – It is 33” high & 21” wide. It indicates the Samadhi of a person called Malla.
In all it has 3 steps –
1st step from the bottom is broken & we can see top edges of a mantapa carving. This indicates that the image of the person who attained Samadhi might have been carved here. He might have been taken in a procession as an appreciation of his vow.
2nd step has carvings of a person sitting in Anjali mudra (both the hands folded) and opposite to him is seen a Jain Muni preaching Sallekhana vow to him. In between both of them is found a Shruta Peetha (a stand used to keep books) with books kept on them.
3rd step has a Tirthankar in padmasana flanked by a person (probably Malla) on one side and a Muni on the other, Chamaras,  pillars of a mantapa with sloped roof. This indicates that there existed a Jain temple nearby.
In both the steps where ever Malla’s carving is seen we can see his hair tied in the form of a bun, wearing a pair of earrings and a belt.

Nishadi’s Text –
Looking at the letters it could be concluded that its period is around 12th century A.D.
In all there are 8 lines in the inscription and is incomplete. A few letters and words in the inscription have been distorted. It starts with a Jain phrase Namaha Siddebyaha and names Mula Sangha Surasta Gana the Muni’s name has been distorted. This Nishadi is related to Malla, he is called as Nalprabhu in the inscription. This indicates that he might have been a head of a certain area. It speaks about the qualities of Malla. Words such as Jina Pada Padmasadharma, Samyaktaratnakara, Chintaratnagunanilaya and Kulapayonidhi indicates that he might have been a staunch follower of Jainism and was looked up with great respect by the people around. In the 8th line the text “Nalprabhu Kunchu” indicates that Malla belonged to Kunchuru. The letter “ra” is not seen and might have continued in the next line.
The inscription starts with the words Namaha Siddebyaha Unlike most of the other inscription of Haveri district of this time period which starts with the words Srimat Parama Gambira. The words Namaha Siddebyaha are seen only in Adi Kadamba’s Devagiri (of Haveri Taluk) inscriptions.

Until about the late 1990’s Jain Munis used to stay overnight near Karmadevara Gudi during their vihar (journey) in this region. Just behind the Nishadi we can find a small open structure in which a person can sleep. This might have been built for the munis to rest.

Folk Story related to Nishadi
There is an interesting Folk story related to this Nishadi. It goes as follows (narrated by Sri Karibasappa Mallappa Haralahalli, a 60 years old villager) –
A person from Kunchuru village had stolen Charaga (Charaga is an offering in the form of dishes that is offered to mother nature by villagers before sowing the seeds and at the time of harvest as a token of respect) from a neighbouring village called Aladagere and was on his way to Kunchuru. This was seen by some villagers of Aladagere and they started chasing him. This person carrying the Charaga threw it at the spot of Karmadevara Gudi and turned into a stone. A women selling oil who happen to see this was amazed and turned into a stone. Two small stones found at the place are said to be these two people and believe that the man & the old lady have been depicted in the Nishadi. The Jain Muni on the Nishadi is referred to the person carrying Charaga and Malla’s carving is referred to be the woman. Leaving long hair might have been a practice those days.

It can be recalled here that another Nishadi and a Chaturmukha Jain idol was found at Kunchuru earlier in 2014 and owing to the efforts of Ravikumar & Nitin H.P. of WWW.JAINHERITAGECENTRES.COM they have been cleaned up and installed on a platform in the village.

Ravikumar K Navalagunda is a lecture of Kannada, Government Pre-University College, Bannikod, Harihara. He is a research scholar perusing his PHD on the subject ‘Jain Inscriptions in Haveri district’ from the Kannada University, Hampi under the guidance of Dr.Paramashivamurthy, Professor, Kannada Department, Tumkur University.