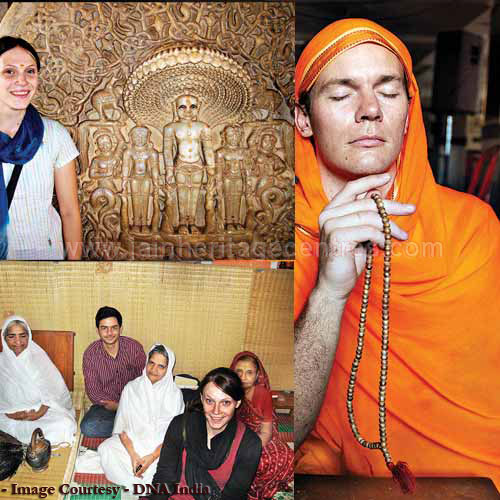 Bells chime at Gulalwadi’s Parshvanath Digambar Jain Mandir, early hours ensuring they can be heard. The signature din of Mumbai’s oldest business district is still to begin but devotees are already trickling into the 180-year-old temple for morning abhishek. Among them, a young Swede, Axel Jarvengren, who exchanges smiles and namastes as he goes about the ritual.

“I’ve been fascinated with Jainism for a couple of years now and even want to eventually accept diksha as a digambar from a saint,” says the 28-year-old with a hint of a young Jack Nicholson in his smile. He’s pursued industrial engineering and economics at the universities of Stockholm and California respectively.

Digambar saint at the temple Pushpakant Sagar smiles, “We’ve offered him a diksha thrice and he always says he needs more time to prepare. I find his devotion and dedication quite compelling.” Jarvengren explains, “It is not the nudity I mind. My issues are with whether I’ll be able to faithfully live an ascetic’s life.”

Brought up Protestant, in a “not-too-religious” family by a judge father and lawyer mom, Jarvengren dabbled in entrepreneurship, hedge-fund management and financial consultancy before finally moving out to pursue what his heart wants. “I was always interested in reading anthropology and fascinated by how our ancestors were comparatively happier than us despite living in the wilderness for 2-3 lakh years and turning agrarian only 10,000 years ago.”

According to him this is what created communities of people who did not know each other leading to problems which have only quadrupled with urbanisation. “I felt drawn to the peace and happiness that the naked nomadic tribes felt and began looking for similar forms of living. I read a lot about Judaism, the gypsy way of life, Zorastrianism and Confucianism too but I was still searching.”

It was around December 2008 that he ran into Jain studies scholar Manish Modi on google groups and found what he wanted. “I felt Jain digambars had something in common with the naked ascetics one read about in ancient Greece and Rome and the shwetambars with Jesus and his apostles. I came down and Manish introduced me to the saints and monks and I was hooked.”

To sustain himself, Jarvengren is into publishing comics which he exports to sell abroad. He’s gotten comics made on Hamlet, Macbeth, Dr Jekyll and Mr Hyde, Great Expectations and Arabian Nights. “Its cheaper to get them animated here and I hope to soon do an entire series on the 24 Jain Tirthankars.”

He laughs off a query on whether this is profitable with a wink. “I get by. With the rupee exchange rate to the Swedish krona working out to what it is, its really cool.”

500 kms away at the 450-year-old Shri Chintamani Parswanath Temple in Ahmedabad’s Rajpur another American, Ellen Gough is busy discussing the intricacies of beautiful mandalas around with the nuns. Every once in a while she reads the inscriptions in Sanskrit, a language she is quite comfortable with and jots notes in a dog-eared notebook.

This 29-year-old from the Yale university who is pursuing her PhD on Jainism’s Suri mantra (also called Mantraraja (the King of Mantras), the Suri mantra and its pata (illustration) are given to the mendicant (sadhu) at time of his promotion to the level of Suri (leader of Mendicants), by his guru) says her interest in non violence brought her in touch with Jainism for the first time in 2005. “A course on Jainism offered to us in the under-graduate programme at the Wisconsin University spoke of how it is the origin of the idea of non-violence and I signed up,” she recounts and adds, “It was here that I met Dr John Cort who spoke of the greater need for Jain studies. According to him there was a lot the religion had to offer to the West and America. I was so hooked that I decided then and there that I would pursue Jain studies and get into teaching about it myself.”

A nine-month stint at the Benares Hindu University for a tutorial in Sanskrit saw Gough choose a project Jain temples and monks. “I was fascinated by the sheer wealth of information.” Though she returned her heart was set on India. This led her to the School of Oriental & African Studies, London where she pursued her masters in Sanskrit. “While this ancient language was good for inscriptions and scriptures I knew I had to learn Hindi too. When an opportunity for that offered itself in the form of a US government grant to come to Jaipur to study at the American Institute of Indian studies, I just jumped at it.”

But her fascination with all things Jain continued. On a visit to the ancient Shri Digamber Jain temple of Sanganer 16 km south of Jaipur Gough chanced upon a beautiful wall-piece. “It was a Jain mandala. I had all along heard of only Hindu and Buddhist ones. The Suri mantra inscribed on it left me intrigued.”

After returning to Jaipur as I read more and more about the mantra and discussed it with monks and nuns I met, I was gripped.” Back home Indic religions specialist who heads Sanskrit studies at Yale university Dr Phyllis Granoff was so impressed that she agreed to be Gough’s guide.

She says whether it is Manish Modi in Mumbai, the monks and nuns who will spend hours explaining intricate tenets or random people who go out of their way to help, India’s generosity overwhelms her. “When a family in Delhi I was talking to got to know of my project they agreed to drive me down over 100 km to meet Gnyanwati Mataji at Hastinapur,” she recounts and adds, “They spent three days with me there and brought me back.”

Used to the idea of people trying to cheat her, she says people are generally surprised and begin laughing when she speaks in Hindi. “A cabbie was asking me for Rs 300 last week to go from Fort to Mumbai Central. I asked him, Mazak kar rahe ho kya? He began laughing and agreed to go by metre.”

Though she admits facing harassment and unwelcome male attention more than anywhere else she still wants to give India a chance. “I don’t subscribe to the idea that it is the unsafest for women. Once you stay safe with timings, places and people it is about as good as bad as any place.”

Manish Modi sums it up well. “While Jarvengren approached Jainism with his heart Gough seems to use her head a lot more.  But on this sub-continent many paths have always led to God.” We couldn’t agree more. – Article & Images Courtesy: Yogesh Pawar, DNA India