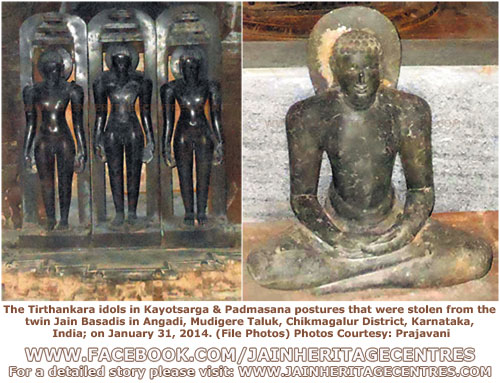 The black-stone statues of Jain thirthankaras Mahaveera, Neminatha, Adinatha and Mallinatha have been stolen from the temples built by the Hoysala dynasty which was called as Sosevur, now identified as Angadi, as its capital.

As renovation of the temples adjacent to each other, was set to begin on February 22, the idols were shifted to a makeshift shed on the temple premises, where they were offered poojas for the past two days. Police said the priest went to the temple after the pooja at the shed on?Friday and found the statues missing.

A statue of Lord Mahaveera in a sitting posture (padmasana) at the Mahaveera temple and three statues of Neminatha, Adinatha and Mallinatha in a standing posture (Kayotsarga) at the Thirthankara temple, have been stolen, said the police.

On receiving the complaint, a dog squad and forensic experts rushed to the spot. Information has been sought from the Department of Archaeology in Mysore for assessment of the value of the statues, said the police. – News Courtesy: Deccan Herald