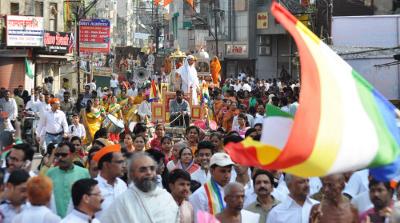 Ludhiana (Punjab), August 31, 2016: The Jain festival of Paryushan Parva is finding admirers even among people not belonging to the community. Paryusana, which means “abiding and coming together”, is a time when the Jains take on vows of study and fasting.
Mall Road resident Palak Kansal is one such resident of Ludhiana who will be observing an eight-day fast as part of the festival because she has “heard that it gives inner peace”. “My mother used to tell me about it, but had never kept the fast. I like the festival because we ask for forgiveness and also forgive others,” she says.
For Pakhowal Road resident Meenu Bansal, another non-Jain, keeping the fast gives her a feeling of purification, and a sense of inner peace and satisfaction. “I like the part that monks are not allowed to touch women and vice versa. This is the best part. There is no one in my family who observes the festival, but I had lot of friends from the Jain community in college. They had told me about it and now I happily fast for eight days,” she says.
During the festival, monks give talks to regular people. A resident of Civil Lines, Neelam Sharma, said ever she was aged four, her when had been mother visiting a Jain monk. “Once I got married, I too started following this practice of hers. I learnt many hymns and read books for it,” she says. “I like the purity and dedication with which the entire festival is celebrated.”
Neelam has been fasting for the past 25 days with the motivation of Monk Tarak Rishi. She is going to continue till last day of Paryushan.
Kanta Gupta, a resident of Ghumar Mandi, will be fasting for eight days. “I am liberal and was drawn to festival because of the dedication the monks show towards the religion,” she says. – News Courtesy: The Times of India