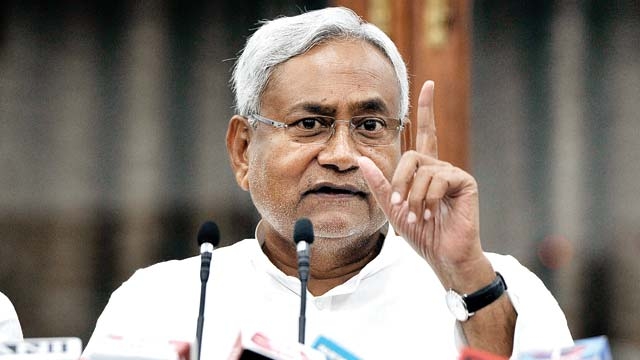 This is an award for the people of Bihar… Today, there is an environment of conflict, intolerance and discrimination in society, which needs to be uprooted: Nitish Kumar

Kumar was presented the award by prominent Jain priest Acharya Mahashraman Ji, who is in Bihar for his Ahimsa yatra, in the presence of Ram Nath Kovind, the Governor of Bihar, at a function in Patna on Tuesday. The organisers said he was selected for his contribution towards “bettering the social environment by prohibiting liquor consumption in Bihar as well as championing the cause of de-addiction across the country.”

Thanking the organisers for the award, Kumar said that people of all religions and communities have supported the liquor ban. “This is an award for the people of Bihar. Just like Mahashraman Ji’s arrival in Bihar for his yatra has laid the foundation for a social change, the liquor ban also aims to achieve the same,” Kumar said.

Humming a few lines from the Anuvrat song, ‘Apne se apna anushasan anuvrat ki paribhasha, maitri bhav sabse pratidin badhta jaaye’, Kumar said, “We are trying to work on these very principals. Today, there is an environment of conflict, intolerance and discrimination in society, which needs to be uprooted. We are working for the propagation of love, brotherhood and harmony.” – News & Image Courtesy: DNA