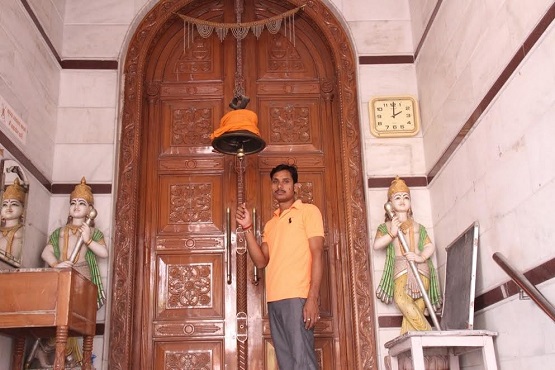 A caretaker of a Jain temple in New Delhi rings the bell for evening prayer. The Vatican sent greetings to Jains for their Mahavir Jayanti festival set for April 9.

Jains, whose religion is based on non-violence, are celebrating the 2,615th birth anniversary of Tirthankar Vardhaman Mahavir.

New Delhi, March 29, 2017: The Vatican sent greetings to people of the Jain religion for their annual festival and sought their collaboration in creating a non-violent society.

The message from the Vatican-based Pontifical Council for Interreligious Dialogue accorded the “warmest felicitations” to those celebrating the 2,615th birth anniversary of Tirthankar Vardhaman Mahavir, who give Jainism its present-day form.

The annual festival called Mahavir Jayanti, is the biggest in their calendar, and falls on April 9 this year. Mahavir is the 24th and last tirthankara (teacher) of the Jain religion, which bases itself on the principle of non-violence.

“Violence, with its many and varied forms, has become a major concern in most parts of the world,” said the greetings from the Vatican. The Indian bishops’ office released it to the press on March 28.

“So, we wish to share with you on this occasion a reflection on how we, both Christians and Jains, can foster non-violence in families to nurture peace in society,” it said.

“Causes of violence are as complex and diverse as its manifestations. Not so infrequently, violence stems from unhealthy upbringings and dangerous indoctrinations,” said the message signed by Cardinal Jean-Louis Pierre Tauran, president of the Pontifical Council for Interreligious Dialogue.

“Today, in the face of growing violence in society, it is necessary that families become effective schools of civilization and make every effort to nurture the value of non-violence,” the message said. “As believers rooted in our own religious convictions lets shape families into ‘nurseries’ of non-violence to build a humanity that cares for our common home and all its inhabitants.”

Acknowledging that non-violence is the “sheet-anchor” of Jainism, the message said, “It entails that we respect and treat the other, including the ‘different other,’ as a person endowed with inherent human dignity and inalienable rights. Avoidance of harm to anyone in any way is, therefore, a corollary to our way of being and living as humans.”

The message to the Jains is “a very good initiative and we all, irrespective of religion, should join hands to bring peace in the world,” said Bishop Raphy Manjaly of Allahabad, executive member of Indian bishops’ Office for Dialogue.

“It is always good to make an intervention via all people of good will. Whenever the humanity is in threat, people should step in and raise voices,” he told.

The Vatican sends such greetings during various religious festivals including one for the feast of Diwali, or Deepavali, also known as the “festival of lights,” India’s most popular Hindu festival.

Jainism, born as a non-Brahminical religious movement in 6th century B.C. in India, has some 5 million followers among the country’s 1.2 billion people. They celebrate the anniversary by walking in processions, singing hymns, praying and sharing food.

Jains believe that one can attain nirvana (perfect bliss) only through tapas (austere life), which includes fasting and mortification; reverence to superiors in knowledge, faith and character; and rigid control of the senses, speech and intellect. – News & Image Courtesy: ucanews.com