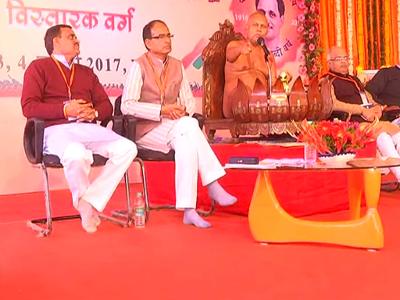 Bhopal (Madhya Pradesh), January 22, 2016: Enthused by chief minister Shivraj Singh Chouhan’s de-addiction drive, state power minister Paras Chandra Jain has demanded a prohibition in Madhya Pradesh. He said like Narmada Sewa Yatra, similar initiatives should be taken to remove liquor vends from river banks in parts of the state.
“My personal opinion is government should impose prohibition in the state and I will support the decision. But, the government has its own priorities. The authorities are conducting a survey in areas where from liquor shops have been removed, recently. The survey will show impact of prohibition in these areas,” Jain told TOI. Jain’s statement came in response to a query on Narmada Sewa Yatra campaign and possibility of similar initiatives in parts of state, including religious towns like Ujjain and Omkareshwar. ‘
The government had earlier announced to remove liquor shops from temple premises in the state, an initiative to shift liquor shops from the river banks is awaited.
Jain said the chief minister kept his promise by not allowing a single new liquor shop in the state. His drive to remove liquor shops from the bank of river Narmada has also been appreciated and received widespread support.
“When chief minister said that he would not allow a single new liquor shop in the state, he kept his words. Not a single new shop came up after the announcement. Instead, the chief minister removed 65 liquor shops situated within 5km of the Narmada river bank. This is a big step indeed,” said the minister.
Chouhan’s initiative against addiction and alcoholism came to light recently when during foot march along the river belt, he called upon villagers to quit alcohol in interest of their family. The chief minister continued his drive against alcoholism in villages on the bank of river Narmada, where he administered pledge to 5,000 youths against de-addiction and alcoholism.
As the campaign gained momentum, demand from cities on the river banks in favour of prohibition gained currency. BJP workers in cities on the bank of river like Ujjain (Kshipra), Vidisha (Betwa), Omkareshwar (Narmada) and Orchha (Betwa) are demanding a total ban on alcohol use now.
It was also learnt that after removing liquor shops from the bank of river Narmada, the government might take up a similar campaign to remove liquor shops from the bank of river Kshipra in Ujjain and river Betwa in Vidisha, said sources in the Mantralaya. The finance department, however, has ruled out possibility of full prohibition in the entire state. They said as the government is facing financial crunch, it would be a major blow, of about 8,000 crore per annum, to the state revenue if prohibition was imposed.
“There is no such proposal under the discussion of the state government. One can make out from the government’s decision as on one side the government has announced new excise police this week, the other side there are rumours of imposing prohibition. Both things could never been done at a time,” said state finance minister Jayant Malaiyya. He, however, clarified that the state government is considering to shift shops located within 500 meters of the banks of river Narmada to other places. – News & Image Courtesy: Times of India