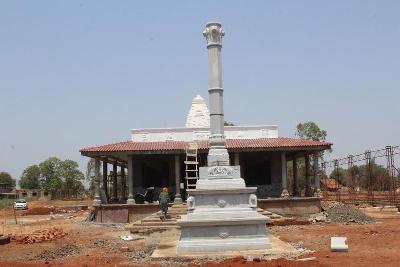 Kasamalagi (Belagavi District, Karnataka), April 27, 2017: Kasamalagi, a hamlet in Khanapur taluk forest about 50km from the city, will host Panchakalyana Mahothsava, commemorating installation of the statue of 1008 Parshwanatha Tirthankara and the newly constructed Jain Basadi from April 28 to May 2.
According to Rajiv Doddannavar, chairman of the festival committee, over 1 lakh people from different parts of country and abroad are expected to take part in the historical event. Dharmadhikari Dr Veerendra Heggade of Dharmasthala and his wife will receive Soudharma Indra and Indrayani honour on the occasion.
Doddannavar said that the statue of Bhagawan Parshwanatha of 11th century was unearthed in Kasamalagi in 2005 while digging for the construction of a school. The statue has very special features as it changes colour three times a day.
Such statues are rare in the country, he said.
Muni Vardhaman Sagarji, Muni Siddasen and Mata Jinavani will grace the occasion. Free health check-up, eye and cancer screening camps and a mass marriage ceremony have been planned during the festival. – News & Image Courtesy: The Times of India