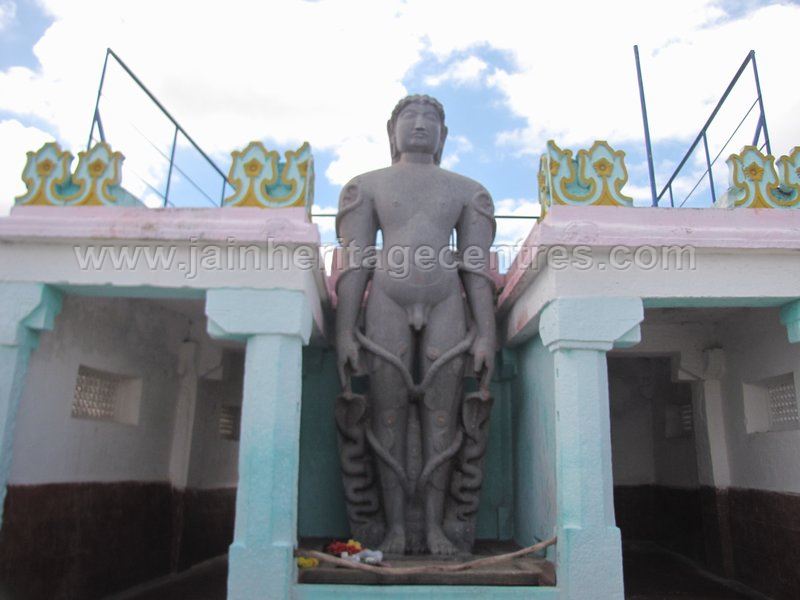 Gommatagiri (Mysuru District, Karnataka), November 27, 2016: Religious fervour and devotion swept the devotees who witnessed the changing colours of Gomateshwara during the annual anointment held to the statue at Gommatagiri on Sunday. The 67th edition of the mastakabhisheka was conducted under the supervision of Gommatagiri Sri Kshetra Seva Samiti led by Devendrakeerthi Bhattaraka seer from Srikshetra Hombuja Mutt. The serene smile of the 20 ft. granite statue located atop a hillock overseeing the KRS backwaters seemed to come alive as the devotees performed the mastakabhisheka and drenched it with water mixed with sandal paste, turmeric, tender coconut water, milk etc. The rituals commenced at noon and went on for more than two hours. The abhishekha was preceded by auctioning of the ‘’kalashas’’ which was bid by the Jain devotees to get a right to participate in the anointment.

As the water cascaded from the forehead to the toe, the statue shimmered in the backdrop of the blue sky.

The mastakabhisheka or the anointment to the statue is an annual affair at Gommatagiri — located about 24 km from Mysuru and off the Hunsur Road near Yelwal — unlike the grand anointment held once in 12 years to its more famous counterpart at Shravanabelagola. The origin of the statue is shrouded in mystery though historians aver it belongs to the Vijayanagar period and is at least 700 years old. The members of the local Jain community expect a heavy tourist rush to Gommatagiri in 2018 coinciding with the Mahamastakabhisheka at Shravanabelagola. “While nearly three million tourists and pilgrims visit Shravanabelagola, about five lakh to eight lakh pilgrims visit Gommatagiri and hence it is imperative that the area is developed to provide drinking water and other amenities, besides improving accommodation facilities,” said Suresh Kumar Jain, representative of the Jain community and secretary of the Mysore Industries Association. Though the statue is of historical significance, there are issues related to its protection owing to quarrying that goes on in the vicinity and poses a threat to its existence, he added. – News Courtesy: The Hindu