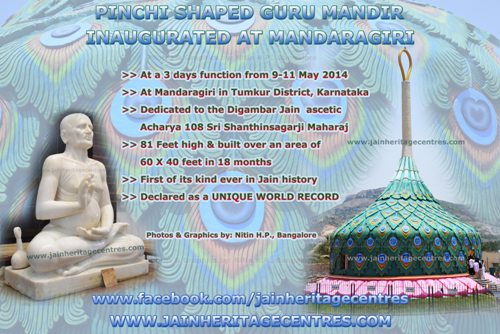 Mandaragiri (Tumkur District, Karnataka), May 11, 2014: The Pinchi shaped Guru Mandir was inaugrated at Mandaragiri in a 3 days function held from 9-11 May 2014. The Guru Mandir is dedicated to the Digambar Jain  ascetic Acharya 108 Sri Shanthinsagarji Maharaj (1872 – 1955) who revived the Digambar Jain asceticism in the past century. The Guru Mandir is about 81 Feet high and is built over an area of 60X40 feet in 18 months. It houses a white coloured 5 feet high marble idol of Acharya Sri Shanthisagarji Maharaj in Padmasana as the main deity. Stories related to the life of Acharya Shanthisagarji Maharaj have been depicted along the walls of this Guru Mandir. This is said to be the first of its kind in the Jain history and was declared as “Unique World Record” during the event. The event was held under the guidance of Muni 108 Sri Pranama Sagarji Maharaj, Muni 108 Sri Prasanna Sagarji Maharaj, His Holiness Swasti Sri Bhanukeerthi Bhattarakha Swamiji of Kambadahalli Jain Math, His Holiness Swasti Sri Bhuvanakeerthi Bhattarakha Swamiji of Kanakagiri Jain Math and His Holiness Swasti Sri Vrushabasena Bhattarakha Swamiji of Lakkavalli Jain Math.

Visit this link to have a look at the photo gallery – http://jainheritagecentres.com/index.php/photo-gallery/karnataka/karnataka/mandaragiri-guru-mandir