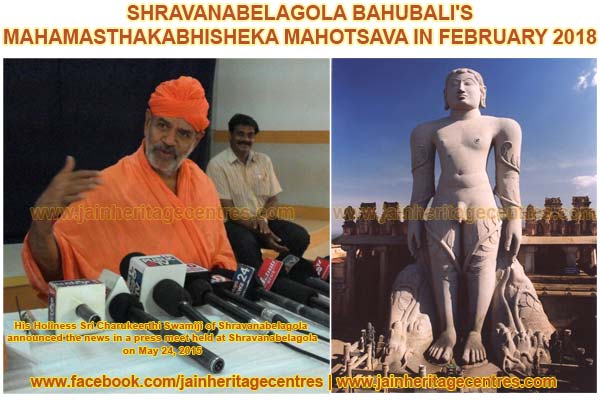 Shravanabelagola (Hassan District, Karnataka), May 24, 2015: The Mahamasthakabhishekha (head anointing ceremony) mahotsava of Lord Bahubali of Shravanabelagola will be conducted in February 2018. His Holiness Jagadguru Karmayogi Swasti Sri Charukeerthi Bhattarakha Swamiji, the pontiff of Shravanabelagola Jain Math announced this in an exclusive press conference convened here at Shravanabelagola.
This historical event bears great testimony since the time of installation of the statue by Chavundaraya the commander in chief of Gangas of Talakadu on March 13, 981 A.D. This 57 feet monolithic statue is situated atop the Vindhyagiri hill. The ritual of Mahamasthakabhishekha is being conducted once in every 12 years from time immemorial. The last  mahamasthakabhishekha was held in 2006. This event attracts the devotees and tourists in large number from different parts of the world.
The arrangements for the event are yet to be started and various committees will be constituted under guidance and leadership of His Holiness Swamiji to ensure smooth functioning of the event. The message of ahimsa for the welfare of mankind is spread through out the country on the occasion.
‘Mahamasthakabhisheka Mahotsava’ a ‘Jana Utsava’ – Though the main focus of the event is Mahamasthakabhisheka of Lord Bahubali, as it has been seen in the past the event is going to be a ‘Jana Utsava’. Where in the state & union Governments will be release amount for the event which will be used for the over all development of Shravanabelagola, Hassan and other neibhouring districts. All roads connecting Shravanabelagola & Hassan district will be repaired and many other basic ameneties to the people of the region will be provided. In addition to this many social welfare programmes will be conducted in the region which empowers the youth & women of the region. All these activities makes the mega event a ‘Jana Utsava’.
Late Prime minister Smt Indira Gandhi participated in the celebration held in 1981, Dr. Shankar Dayal Sharma the President and P.V.Narasimha Rao also participated in the event in 1993. Furthermore, Dr.A.P.J.Abdul Kalam the then president of India had inaugurated the event in 2006. It is enterprising to remember that Pandit Jawaharlal Nehru the first prime minister of India had expressed admiration for the serene beauty of lord Gommateshwara. He was dumb founder and looked at this magnificent statue.
– Nitin H.P. & Jain Heritage Centres News Service (JHCNS)